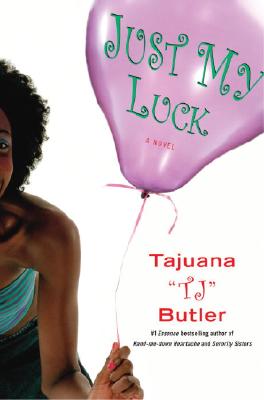 Just My Luck: A Novel
by Tajuana “TJ” Butler

Book Description:
Today is no ordinary day for thirty-eight-year-old Lanita Lightfoot. Today represents the culmination of years of struggle and sacrifice. Today she graduates from college. But first, Lanita’s husband treats her to a day of beauty at an upscale black salon in Los Angeles, during which she shares her story with the staff and the other customers and what a story it is. . .

Talk about an entrance. Lanita was born in a little corner store in the thick of the Watts riots. Her untimely entry into the world saved the joint from being sacked by looters and the shop owner showed his gratitude by giving Lanita’s mother, Aretha, a decade of rent-free residence. But when the reward dries up and Aretha takes to the bottle and a no-good loser boyfriend, Lanita’s life takes a sharp turn for the worse. Forced to live in a cramped, dingy apartment, Lanita longs for her real daddy to ride to the rescue. But when he finally shows up, she finds he isn’t quite the knight she’s dreamed of.

Still, Lanita is determined to make something of herself. A straight-A student throughout high school, she is accepted to Howard University in Washington, D.C., and marvels that she’s finally escaped the ghetto. As Lanita embarks on the journey of becoming a woman, she encounters icons including Michael Jackson and Todd Bridges, who help transform her perception of her own life. But one year short of graduation, she must return to Los Angeles to care for the ailing Aretha an unpleasant reality that leads her to join in a sordid West Hollywood strip club and farther away from her dreams until the fateful night her high school heart throb shows up at the club and shows her that the easy money she makes comes with a high price.

The bestselling author of The Night Before Thirty, Tajuana “TJ” Butler delivers one of her most richly imagined, complex, and beloved characters yet and delves into the void that many young women spend their lifetime trying to fill: the one left by a father’s absence.

More books like Just My Luck: A Novel may be found by selecting the categories below:

Tell us what do you think about Just My Luck: A Novel.