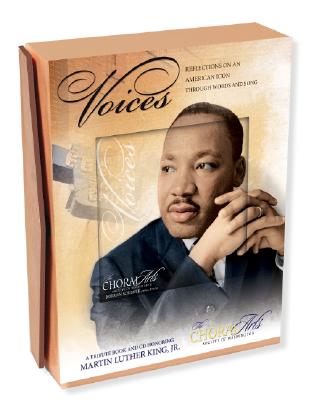 Hardcover Description:
Some 40 years after his death, Dr. Martin Luther King, Jr., is being honored through powerful words and song in a special Boxed set [Book & CD in jewel case) from Dalmatian Press and The Choral Arts Society of Washington. Voices: Reflections on an American Icon in Words and Song comprises 96 pages of remembrances as well as music inspired by the American movement for Civil Rights.

The book offers reflections from foot soldiers who marched alongside Dr. King, contemporary observers, and distinguished witnesses to history, such as Julian Bond, U.S. Rep. John Lewis, and Harris Wofford, assistant to President John F. Kennedy. Also included are writers, like the spirited poet Nikki Giovanni, Pulitzer Prize-winner Gene Patterson, and journalist John Seigenthaler, an assistant to Attorney General Robert F. Kennedy. Nobel Peace Prize-winners Jimmy Carter and Archbishop Desmond Tutu have also added their thoughts on King, whose passion was to bring all people together in a symphony of love, said Noel Leo Erskine, an associate professor of ethics and theology at Emory University.

Dr. King considered music to be the soul of the Civil Rights movement, embracing protestors in companionship and a common cause. The freedom songs are playing a strong and vital role in our struggle, he once said. I think they keep alive a faith, a radiant hope in the future, particularly in our most trying times.

The Voices CD features one of the countrys finest symphonic choirs, The Choral Arts Society of Washington. Members lift their voices in songs such as Goin’ Up to Glory, Lift Every Voice and Sing, and Dr. King s favorite hymn, Precious Lord, Take My Hand. Music was selected from the Society’s annual tributes to Dr. King at The John F. Kennedy Center for the Performing Arts..

""Nothing surpasses the power of music to knit together our differences, heal our wounds, and inspire our spirits,"" said Norman Scribner, Society Artistic Director. ""We feel privileged and joyful to be able to add our voices in song to his memory, and to his timeless message for us all.""

Books similiar to Voices Reflections On An American Icon Through Words And Song may be found in the categories below: