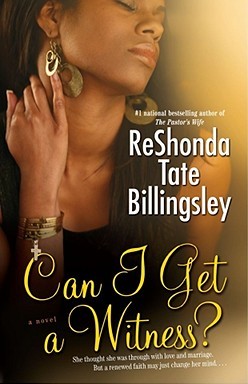 Can I Get a Witness?
by ReShonda Tate Billingsley

The irony of a divorce-court judge getting divorced herself is not lost on Vanessa Colton-Kirk. After all, she’s seen everything in her notorious Houston courtroom, where she’s presided over the breakup of countless unhappy and disillusioned couples. Even her own sister, Dionne, is dealing with a relationship drama of her own, a betrayal that’s left Dionne hungry for revenge on the man she hoped to marry. But when career-driven Vanessa chooses to work late on the night of her fifth wedding anniversary, her husband, Thomas, decides he’s had enough of her putting work before starting the family he so desperately wants — and he tells her he wants out.

In a last-ditch effort to save the marriage, their own judge orders Vanessa and Thomas to attend a spiritual retreat. She goes — but not without a fight. And just when she thinks she’s won, fate steps in and helps her see things in a whole new light. Now Vanessa and her sister face the toughest choices of their lives. Can Dionne untangle herself from a payback plan gone horribly wrong? Can Vanessa rebuild a bond that she had a big part in destroying? Will she learn from her own mistakes and her years of experience on the bench? Or will she need something else to keep a tide of bitterness from taking over her life?

More books like Can I Get a Witness? may be found by selecting the categories below: