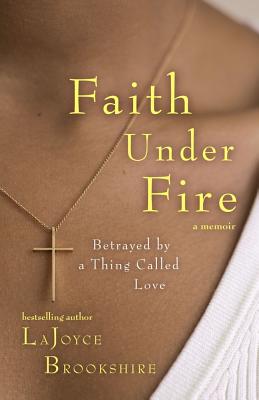 Faith Under Fire: Betrayed By A Thing Called Love
by LaJoyce Brookshire

Read Our Review of Faith Under Fire: Betrayed By A Thing Called Love

Hardcover Description:
The bestselling author of the novels Soul Food and Web of Deception, LaJoyce Brookshire tells a true story more shattering than any work of fiction. It’s her story. A memoir of survival against the odds and courage in the face of a troubled relationship and a terrifying illness. A chronicle of faith under fire.Imagine the joy of being swept away by your very own Prince Charming, and the excitement of marrying him. Imagine starting a life together. Imagine discovering a side of him that you never knew existed — a controlling and explosive side. Imagine watching him slowly, inexplicably dete-riorate before your eyes. Imagine his doctors telling you, "He has AIDS."That was the reality for LaJoyce Brookshire, and in this page-turning, astoundingly moving memoir, she tells the full story of her marriage to her first husband, who knew he was HIV positive at the time they wed but kept this information hidden from her — until his body betrayed him.Imagine how you would react. What would you do? Contemplate murder? Divorce? Live in denial? Or would you turn to God?That’s what LaJoyce chose to do in the face of her husband’s health crisis — and every other challenge life has presented: With her faith firmly planted and with God beside her at all times, LaJoyce faced the deadly secret that had been kept under wraps by her husband — and by his family, who knew of his condition but revealed nothing. She stayed by his side, coordinating his care and even changing his diapers, until the end.Faith Under Fire tells the story of a marriage tainted by lies, but it also tells much more: a capsule portrait of the specter of AIDS facing African-American women today, it reveals how fear, ignorance, and secrets perpetuate the disease. In a poignant narrative overflowing with her gutsy humor and vibrant spirit, LaJoyce Brookshire shares her faith in all of its richness. She offers a living testament to relying on God’s strength through any ordeal, and shows how His truth is all we need to believe in, every day of our lives.

More books like Faith Under Fire: Betrayed By A Thing Called Love may be found by selecting the categories below: