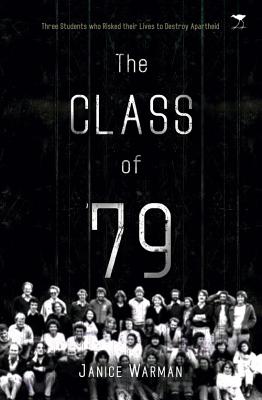 The Class of ’79: Three Students Who Risked Their Lives to Destroy Apartheid
by Janice Warman

Book Description:
Out of the class of 1979 at Rhodes University one of the quietest girls in the class, Marion Sparg joined the armed wing of the African National Congress (ANC) Umkhonto we Sizwe, trained in exile in Angola, and was eventually convicted of bombing three police stations. The Cape Times journalist Zubeida Jaffer was imprisoned, poisoned, and tortured for her writing and her union activism, yet chose not to prosecute her torturer. Guy Berger, also a student and later a lecturer at Rhodes University, was arrested and interrogated for possession of banned books. He spent seven months in custody, three of which he spent in solitary confinement. He was ultimately sentenced to four years in prison. For them, it began at the moment that each of them realized that what was happening in South Africa was wrong, and that they simply could not tolerate it. And for all of them, that moment came at Rhodes University. Each of them chose to reject their backgrounds and take the path of resistance, following in the footsteps of the famous few. Among these were the writers Breyten Breytenbach, Nadine Gordimer, Ingrid Jonker, Alan Paton; and the fighters Albie Sachs, Ruth First, Trevor Manuel, and Joe Slovo. This book is for all those who suffered under apartheid, and suffered to end it, and in particular for Marion, Zubeida, and Guy, who have shared their story so generously.

More books like The Class of ’79: Three Students Who Risked Their Lives to Destroy Apartheid may be found by selecting the categories below:

Tell us what do you think about The Class of ’79: Three Students Who Risked Their Lives to Destroy Apartheid.