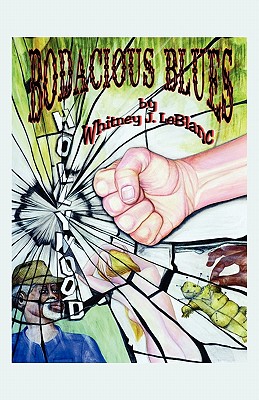 Hardcover Description:
Bodacious Blues completes the saga-trilogy of a Creole family from Estilette Louisiana. From the depression on, three generations of this family have struggled in the midst of blues music, religious conflicts, lust, lynching, murder, voodoo, and racism. Now comes the grandchildren of Martha Broussard, who carve out paths through the changing world, and their stories emerge as they experience the rites of passage into adulthood. Ann Martel develops into the doctor that her grandfather hoped her brother would become. Disappointed in love, she finds contentment and happiness with an older woman-partner.

Meanwhile, her brother, Les Martel, defies all who challenge the man he desires to be. Believing in an eye for an eye, he kicks the ass of anyone who stands in his way. He protests racial intimidation in Estilette, takes on an abusive lover in Chicago, fights a Paul Bunyan giant in the backwoods of Bemidji, kicks the ass of a contemptible womanizer in Nashville, and gives comeuppance to a backstabber in Hollywood. Living life on his own terms, he soon discovers that Hollywood is not the place he thought it would be- the values were not his values- the truth was not his truth- trust was deception- honesty was weakness and loyalty was an unknown word.

In Bodacious Blues, Les Martel brings the saga of this proud family, to a final conclusion in the 1980’s. In a milieu of religious controversy, sexual cross-identification, and the racial exploitations of Hollywood, he discovers that coming of age as a man was not as easy as he thought.

Early review comments of this final novel of the trilogy follow:

"Whitney LeBlanc’s, Bodacious Blues is an excellent and entertaining coda to his explosive Creole family trilogy. As with his two preceding volumes, Blues in the Wind and Shadows of the Blues-Bodacious Blues and its lead character Les Martel, takes us on a soulful and heartfelt journey. It was hard to put down."

"What an exciting novel. My mother, her father and his mother were born in Waterproof, Louisiana. This novel reminded me of some of the stories I heard. There is such a rich cultural history in Louisiana I felt like a fly on the wall experiencing Les’s journey. This feels like as bestseller and a film.."

Marla Gibbs -Lead Actress of 227 series. Major supporting actress of The Jeffersons series. Appeared in over 100 films and television productions. Producer, writer and recipient of many awards.

"Talent will out! Whitney has just completed his third historical novel. Last of the trilogy, Bodacious Blues depicts the trials and tribulations of the townspeople of Estilette Louisiana in their association with its most prominent families, the Fergerson/Broussards. Blues, voodoo and the inborn racism of the area touches everyone’s lives in this, Whitney’s tense climatic finish to the Fergerson/Broussard family.- Great reading!!!!"

"I have known Whitney J. LeBlanc since 1963 and he is without doubt the most creative man know. A brilliant scenic designer, playwright, director, stained glass artist and now novelist. Whitney never ceases to amaze. With Bodacious Blues, he draws us into the life of Les Martel, aspiring actor and a southern fish trying to swim in northern waters. It’s a wonderful and very entertaining story that finds relevance for our present times. Well done my friend!"

Books similiar to Bodacious Blues may be found in the categories below: