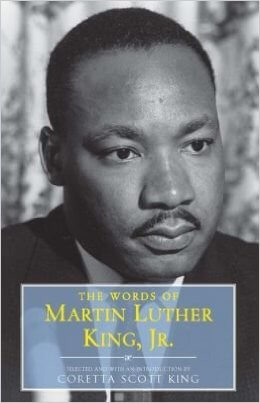 The Words of Martin Luther King
by Coretta Scott King

Book Description:
By the time he was assassinated in 1968 at the age of thirty-nine, Martin Luther King, Jr., had led millions of people in a nonviolent movement that shattered forever the Southern system of segregation of the races. His eloquent, passionate advocacy of civil and human rights, rooted in the techniques of peaceful demonstration pioneered by Mahatma Gandhi, brought a new dimension of dignity to people’s lives and a new hope for freedom and the community of man.

Selected and introduced by Coretta Scott King, this book helps keep the dream alive by focusing on seven areas of Martin Luther King, Jr.’s concern: the community of man, racism, civil rights, justice and freedom, faith and religion, nonviolence, and peace. The message these words convey is as inspiring and fundamental to life today as it ever was during his lifetime.

Tell us what do you think about The Words of Martin Luther King.