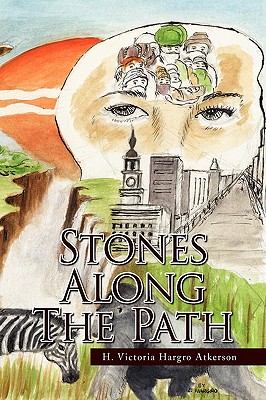 Stones Along The Path
by H. Victoria Hargro Atkerson

Jessica Hamilton relates in Stones Along the Path a romantic bi-continental, cross-cultural family saga that unfolds in Africa and migrates to America, glimpsing three generations of a culturally diverse black family. Jessica’s oldest son, Dexter tells the reader his side of the same story.

As a Peace Corps Volunteer, Jessica meets a tall handsome African businessman, Akinyele Akinshegun, whom she is attracted to immediately. Confronted by her love for this man, she instinctively knows that if she gives in to him, it will nullify her long awaited return home and the future she has carefully planned for herself.

In whispered prayers to God, Akinyele fulfills his life-long quest for an erotically satisfying love relationship when he convinces Jessica to marry him. Oblivious to the dangers around them, their love, which is laced with warm passionate encounters, takes them on an extended honeymoon into the most vivid and picturesque parts of the African continent.

Victoria Falls , the pyramids, the Okavango Delta are among many locations the enthralled lovers explore while living out the most sensuous and sexually satisfying experiences of their lives. When the couple discovers that they are expecting a child, they travel to Akinyele’s native country where Jessica is greeted warmly by his parents and discovers whom she married.

Before the birth of their son, she is faced with deception, lies, and betrayal. Heartbroken and devastated by secrets her husband kept from her, she returns to Philadelphia, where she is determined to raise her child in a morally correct environment without the toxic love she continues to crave.

What does the future hold for Jessica and her child? What problems does she encounter? Can she live without the love she left behind?

Books similiar to Stones Along The Path may be found in the categories below: