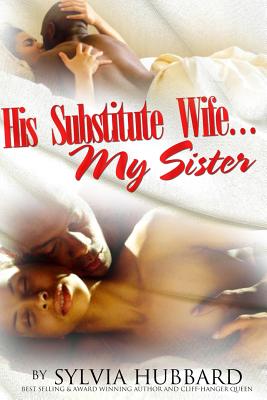 His Substitute Wife… My Sister
by Sylvia Hubbard

Book Description:Life has never been worth living for Charisse before her father died. After three attempts to kill herself were unsuccessful, she makes a deal for release from hell on earth, with one of the people who made her life what it was. It wasn’t until Chyna finds out that her husband, Parker Mills, was having an affair with her twin sister, Cheyenne, that she realizes she’s losing the best thing she’s ever had. Feeling the ultimate betrayal by her own sibling, Chyna knows she has to do whatever it takes to keep her husband and give him what he longs for - a baby. Knowing that she’s unable to have children and Cheyenne is afflicted with the same condition, she decides to go to the only person that can help her save her marriage - her younger sister, Charisse. In the end, one sister will die, another will lose everything and one will get everything that she wants.

More books like His Substitute Wife… My Sister may be found by selecting the categories below: