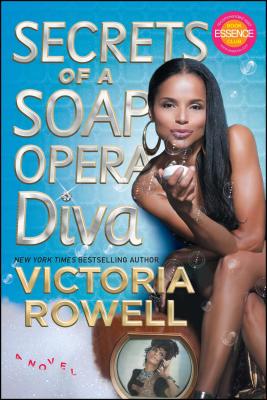 Secrets of a Soap Opera Diva: A Novel
by Victoria Rowell

Paperback Description:
Calysta Jeffries is the hottest black actress in daytime and the diva of the soap opera world, known for her role as Ruby Stargazer on television’s most popular soap opera, "The Rich and the Ruthless."

After fifteen years, three returns from the dead, two failed pregnancies, one alien abduction, and overcoming retrograde amnesia, Calysta still hasn’t managed to snag the biggest award in daytime drama: the Sudsy. Now is supposed to be her moment. But Calysta’s onscreen/offscreen rival Emmy Abernathy wins the award for the fourth time. The drama begins when journalist Mitch Morelli asks Calysta for a quote after the award show and her true feelings for her costar slip out.

Ripped from the headlines of Soap Opera Digest and straight off of the television screen, Secrets of a Soap Opera Diva will give readers plenty to talk about as they try to guess where the real world ends and Rowell’s imagination begins.

More books like Secrets of a Soap Opera Diva: A Novel may be found by selecting the categories below: