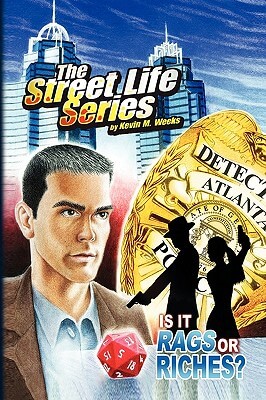 The Street Life Series: Is It Rags Or Riches?
by Kevin M. Weeks

Even though the Washington D.C. tabloids surmise that Teco Jackson was slain by The Paradox, the Feds are anxious to prove that Teco is still alive. Feeling double-crossed, The Paradox elevates his deadly game to a new level by sabotaging anyone who has started a new life after leaving the Strictly Business (SB) drug crew. For those determined to succeed despite the odds, is it rags or riches?

Contradiction, ambiguity, and enigma permeate the narrative and characters. Twin sisters on opposite sides of the drug trade Or are they? Two brothers, one doing hard time for ten years for a murder he didn’t commit; the other a hard-bitten drug lord intent on dominating the drug trade in greater metropolitan Atlanta a free man. Then there is Atlanta itself, where the story is set Burned by Sherman in the Civil War because of its function as a munitions depot for the railroad system of the Confederacy, it is now one of the most multicultural cities in America, with one of the largest and wealthiest African American communities in the country. The author shows his love and admiration for the city while painting a gritty and realistic picture of the power of drugs and the pull of the street life. Possibilities of redemption and renewal emerge against an aggressive background of entrapment and menace. Plenty of action and plot twists make this third novel in the Street Life series a page-turner that is both ultra-modern and unique.

Library Journal [The Word on Street column. November 19, 2009.]
Verdict: Weeks s combination of mystery and police procedural will draw in readers as he shows the cops point of view. The long list of characters and plot tangents may be confusing, but bloody executions and a wild, climatic shoot-out will hold interest. Think of CBS s 48 Hours Mystery set to a street lit riff. [At the African American Pavilion at BookExpo 2009, Weeks s books won the Urban Series of the Year Award. Ed.]

More books like The Street Life Series: Is It Rags Or Riches? may be found by selecting the categories below: