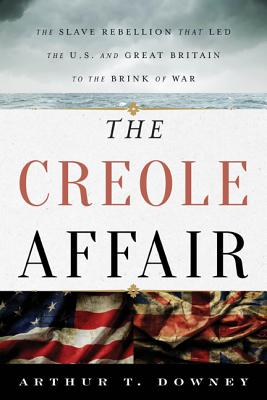 The Creole Affair: The Slave Rebellion That Led the U.S. and Great Britain to the Brink of War
by Arthur T. Downey

Book Description:
The Creole Affair is the story of the most successful slave rebellion in American history, and the effects of that rebellion on diplomacy, the domestic slave trade, and the definition of slavery itself. Held against their will aboard the Creole—a slave ship on its way from Richmond to New Orleans in 1841—the rebels seized control of the ship and changed course to the Bahamas. Because the Bahamas were subject to British rule of law, the slaves were eventually set free, and these American slaves’ presence on foreign soil sparked one of America’s most contentious diplomatic battles with the UK, the nation in control of those remote islands. Though the rebellion appeared a success, the ensuing political battle between the United States and Britain that would lead the rivals to the brink of their third war, was just beginning. As such, The Creole Affair is just as importantly a story of diplomacy: of two extraordinary non-professional diplomats who cleverly resolved the tensions arising from this historic slave uprising that, had they been allowed to escalate, had the potential for catastrophe.

More books like The Creole Affair: The Slave Rebellion That Led the U.S. and Great Britain to the Brink of War may be found by selecting the categories below: