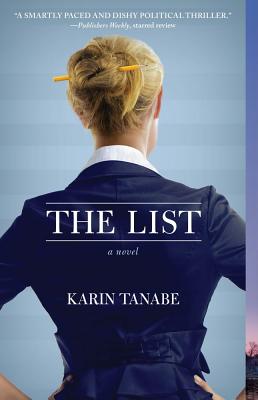 From a former Politico reporter, a fast-paced debut novel about a young journalist at D.C.’s hottest (and most cut-throat) political rag who uncovers a scandal sure to turn the Beltway inside out.

Meet Adrienne Brown, a twenty-eight-year-old Wellesley College grad who recently left her glamorous job at Town & Country for a spot at the Capitolist. Known simply as the List to Beltway insiders, it’s the only media outlet in D.C. that’s actually on the rise. Taking the job means accepting a painful pay cut, giving up perks like free Louboutins, and moving back in with her parents, but Adrienne is certain that her new position will be the making of her career.

And it is—but not at all in the way that she expects. The Capitolist runs at an insane pace: Adrienne’s up before five in the morning, writing ten stories a day (sometimes on her BlackBerry, often during her commute), and answering every email within three minutes. Just when it seems like the frenetic workload is going to break her, she stumbles upon a juicy political affair, involving a very public senator—and her most competitive colleague. Discovering that there’s much more to the relationship than meets the eye, Adrienne realizes she’s got the scoop of a lifetime. But should she go public with the story?

Inspired by Washington insider Karin Tanabe’s experiences at Politico, The List is a riveting debut novel bursting with behind-the-scenes details about what happens when media and politics collide.

In 1897, one young woman risks everything to earn a college degree—but the secret she hides could be her undoing. Passing meets The House of Mirth in this captivating reimagining of a remarkable true story.&rldquo

Since childhood, Anita Hemmings has longed to attend the country’s most exclusive school for women, Vassar College. Now, a bright, beautiful senior in the class of 1897, she is hiding a secret that would have banned her from admission: Anita is the only African-American student ever to attend Vassar. With her olive complexion and dark hair, this daughter of a janitor and descendant of slaves has successfully passed as white, but now finds herself rooming with Louise “Lottie” Taylor, the scion of one of New York’s most prominent families.

Though Anita has kept herself at a distance from her classmates, Lottie’s sphere of influence is inescapable, her energy irresistible, and the two become fast friends. Pulled into her elite world, Anita learns what it’s like to be treated as a wealthy, educated white woman—the person everyone believes her to be—and even finds herself in a heady romance with a moneyed Harvard student. It’s only when Lottie becomes infatuated with Anita’s brother, Frederick, whose skin is almost as light as his sister’s, that the situation becomes particularly perilous. And as Anita’s college graduation looms, those closest to her will be the ones to dangerously threaten her secret.

Set against the vibrant backdrop of the Gilded Age, an era when old money traditions collided with modern ideas, Tanabe has written an unputdownable and emotionally compelling story of hope, sacrifice, and betrayal—and a gripping account of how one woman dared to risk everything for the chance at a better life.

Books similiar to The List may be found in the categories below: