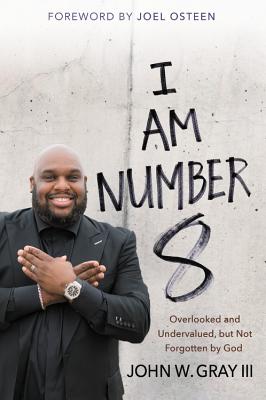 I Am Number 8: Overlooked and Undervalued, but Not Forgotten by God
by John Gray

If God can take David—the invisible eighth son of a forgotten family—and turn him into a king, just imagine what magnificent plans He has for redeeming your life.David was born a number 8—a hidden gem, often overlooked and undervalued by everyone except for God. For David, being a number 8 seemed like a curse until the day God transformed him from the unknown eighth son of Jesse into the much-honored king of Israel. When God sends out an invitation to greatness, His directions don’t always make sense to us. You may feel like the most invisible, broken number 8 out there, but God sees your hidden value and is growing you for better things. David didn’t know it, but his time as a simple shepherd with a dull future did not go unnoticed by God. In David’s darkest moments, he was cultivating the kind of gifts, wisdom, and leadership he would need to become a king. Even when you’re an underdog in the eyes of the world, God is working behind the scenes to develop you into a king or queen.

More books like I Am Number 8: Overlooked and Undervalued, but Not Forgotten by God may be found by selecting the categories below: