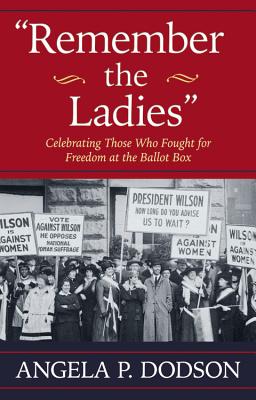 Remember the Ladies: Celebrating Those Who Fought for Freedom at the Ballot Box
by Angela P. Dodson

While Hillary Rodham Clinton’s defeat in her run for the presidency may be a setback in the march toward breaking the ultimate glass ceiling, her candidacy—and her victory in the popular vote—can be celebrated as an historic milestone coming less than one hundred years after American women first got that vote. Indeed, 2017 marks the centenary of the turning point in the long struggle that led to the 1920 ratification of the Nineteenth Amendment granting U.S. women suffrage. In her comprehensive survey of the cause, REMEMBER THE LADIES: Celebrating Those Who Fought for Freedom at the Ballot Box (Center Street; May 23, 2017; $26.00), journalist Angela P. Dodson documents one of the longest, most hard-won struggles for civil rights in our country’s history.

“As a woman who went to school from the mid-1950s to the late 1970s, grade school to grad school, I knew little of the suffrage movement and the women behind it,” Dodson writes. “Women received almost no mention in our history books, and women’s studies courses were not in our college catalogs. Even as a feminist, voracious reader, and often reviewer of books in general and history in particular, I had rarely stumbled upon books about women’s roles and contributions. When I embarked on the project to write this book, I was inspired by the upcoming centennial anniversary of the Nineteenth Amendment—known as the Susan B. Anthony Amendment—which gave all women the right to vote. I had no idea how little I knew about Anthony and the other women of the movement, and I suspect that I am not alone.”

Dodson’s rich narrative spans our country’s history, from even before Abigail Adams urged her husband John to “remember the ladies” as the Founding Fathers declared independence and shaped the new nation. The centerpiece of the story is the seventy-year struggle that began before the Civil War and culminated in the Nineteenth Amendment. Dodson traces how the women’s suffrage movement grew out of the mounting efforts to abolish slavery. With a core belief in equality and human rights, inspired by Quaker teachings, women such as Lucretia Mott and Susan B. Anthony led the struggle and spread the message through a series of conventions before the Civil War. Elizabeth Cady Stanton and Anthony emerged as the primary leaders of the woman suffrage movement after the war. The book offers textured portraits of these and dozens of other women who were on the front lines of the fight for women’s rights.

REMEMBER THE LADIES explores the many obstacles encountered on the rough road to suffrage, and also places the movement in the context of the other social and political upheavals unfolding during the decades. Dodson recounts how women hoped in vain that their considerable contributions to the war efforts during the Civil War and World War I would gain them the support they needed to win the vote. She looks at schisms within the movement that sometimes set back the cause, including the ideological conflict that arose between abolitionist and women’s rights faction when black men who had been slaves gained the right to vote but women, both white and black, did not. Resentment only grew when a wave of uneducated immigrant men had the right to vote as naturalized citizens while educated native-born women did not. A new approach, shifting the efforts to gain the vote to a federal rather than merely at the state level would be a key development.

With women securing the vote almost a hundred years ago, Dodson notes that women now exercise their rights at the polling place in larger numbers than men, making them a dominant force in American politics. But, she also points out that the once-held belief that women would form a united voting bloc has proven false (a majority of white women, for instance, voted for Donald Trump, while black women and Latinas overwhelming supported Clinton). “It turns out they have divergent interests and ideologies just like men.” Dodson writes. “Women have proved, however, that they wanted the vote and were willing to use it, and women have had many victories in politics.”

An invaluable resource, REMEMBER THE LADIES is lavishly illustrated with photos, line art, posters, ads, political buttons, and press clippings that capture the history of the suffrage movement. A series of appendices document women’s ongoing political engagement and achievements in the United States.

Books similiar to Remember the Ladies: Celebrating Those Who Fought for Freedom at the Ballot Box may be found in the categories below: