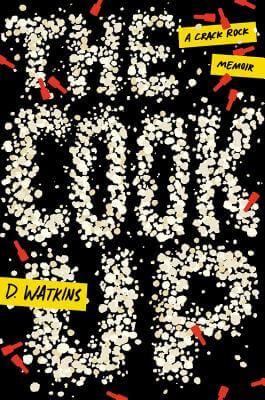 The Cook Up: A Crack Rock Memoir
by D. Watkins

Hardcover Description:
Reminiscent of the classic Random Family and The Short and Tragic Life of Robert Peace, but told by the man who lived it, THE COOK UP is a riveting look inside the Baltimore drug trade portrayed in The Wire and an incredible story of redemption.

The smartest kid on his block in East Baltimore, D. was certain he would escape the life of drugs, decadence, and violence that had surrounded him since birth. But when his brother Devin is shot-only days after D. receives notice that he’s been accepted into Georgetown University-the plans for his life are exploded, and he takes up the mantel of his brother’s crack empire. D. succeeds in cultivating the family business, but when he meets a woman unlike any he’s known before, his priorities are once more put into question. Equally terrifying and hilarious, inspiring and heartbreaking, D.’s story offers a rare glimpse into the mentality of a person who has escaped many hells.

More books like The Cook Up: A Crack Rock Memoir may be found by selecting the categories below: