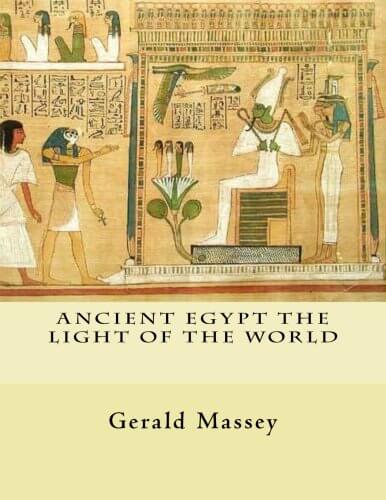 Ancient Egypt The Light of the World: Vol. 1 and 2
by Gerald Massey

A WORK OF RECLAMATION AND RESTITUTION IN TWELVE BOOKS Vol. I and 2. It may have been a million years ago The Light was kindled in the Old Dark Land With which the illumined Scrolls are all aglow, That Egypt gave us her mummified hand: This was the secret of that subtle smile Inscrutable upon the Sphinx’s face, Now told from sea to sea, from isle to isle; The revelation of the Old Dark Race; Theirs was the wisdom of the Bee and Bird, Ant, Tortoise, Beaver, working human-wise; The ancient darkness spoke with Egypt’s Word; Hers was the primal message of the skies: The Heavens are telling nightly of her glory, And for all time Earth echoes her great story. I have written other books, but this I look upon as the exceptional labour which has made my life worth living. Comparatively speaking, ’A Book of the Beginnings’ (London, 1881) was written in the dark, ’The Natural Genesis’ (London, 1883) was written in the twilight, whereas ’Ancient Egypt’ has been written in the light of day. The earlier books were met in England with the truly orthodox conspiracy of silence. Nevertheless, four thousand volumes have got into circulation somewhere or other up and down the reading world, where they are slowly working in their unacknowledged way. Probably the present book will be appraised at home in proportion as it comes back piecemeal from abroad, from Germany, or France, or maybe from the country of the Rising Sun. To all lovers of the truth the writer now commends the verifiable truths that wait for recognition in these pages. Truth is all-potent with its silent power If only whispered, never heard aloud, But working secretly, almost unseen, Save in some excommunicated book; ’Tis as the lightning with its errand done Before you hear the thunder. For myself, it is enough to know that in despite of many hindrances from straitened circumstances, chronic ailments, and the deepening shadows of encroaching age, my book is printed, and the subject-matter that I cared for most is now entrusted safely to the keeping of John Gutenberg, on this my nine-and-seventieth birthday. GERALD MASSEY

Books similiar to Ancient Egypt The Light of the World: Vol. 1 and 2 may be found in the categories below: