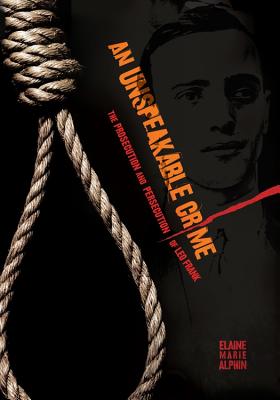 An Unspeakable Crime: The Prosecution and Persecution of Leo Frank
by Elaine Marie Alphin

Book Description:
Was an innocent man wrongly accused of murder? On April 26, 1913, thirteen-year-old Mary Phagan planned to meet friends at a parade in Atlanta, Georgia. But first she stopped at the pencil factory where she worked to pick up her paycheck. Mary never left the building alive. A black watchman found Mary’s body brutally beaten and raped. Police arrested the watchman, but they weren’t satisfied that he was the killer. Then they paid a visit to Leo Frank, the factory’s superintendent, who was both a northerner and a Jew. Spurred on by the media frenzy and prejudices of the time, the detectives made Frank their prime suspect, one whose conviction would soothe the city’s anger over the death of a young white girl. The prosecution of Leo Frank was front-page news for two years, and Frank’s lynching is still one of the most controversial incidents of the twentieth century. It marks a turning point in the history of racial and religious hatred in America, leading directly to the founding of the Anti-Defamation League and to the rebirth of the modern Ku Klux Klan. Relying on primary source documents and painstaking research, award-winning novelist Elaine Alphin tells the true story of justice undone in America.

More books like An Unspeakable Crime: The Prosecution and Persecution of Leo Frank may be found by selecting the categories below:

Tell us what do you think about An Unspeakable Crime: The Prosecution and Persecution of Leo Frank.