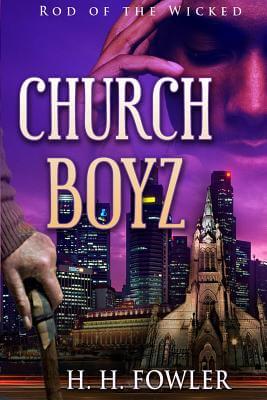 Church Boyz: Rod of the Wicked
by H H Fowler

Book Description:
Imagine sharing the spotlight with a ruthless blackmailer, whose only intention, is to take all of which you’ve worked hard to achieve your wealth, your fame, and your church of seven thousand members. For Pastor Leroy Paxton of Mount Moriah Baptist Church, this is no imagination. Five years ago, he committed a toxic sin and almost lost his life trying to cover it up. He now comes face to face with his past, which haunts him from the pulpit to his bedroom. And the only way out of this nightmare is to make a decision that could cost him everything. Then imagine being mentored by one of the most revered men, Abraham Winder, whose stance on accountability and sexual purity is taught rigorously within the Mount Moriah mentoring program, only to discover your mentor is not what you expect. This is the reality for Dominic Housten, one of Abraham’s closet and trusted prot g s, who accidentally stumbles upon a scene that left him frozen in disbelief. As Dominic struggles with betrayal, he confides in the pastor’s daughter the only woman he’d secretly loved for years. The only problem with that is the pastor’s daughter is married to Phillip Benjamin, a deacon of the church and an extremely jealous man, who suspects Dominic’s intention runs deeper than just a casual friendship. The intertwined lives of these four men show that the righteous are not perfect, and at times, are tempted to forsake the ways of God. As each of these men battle to regain their focus, they will come to realize that the consequences of their sins are far greater than they’d anticipated just one stupid mistake could produce a lifetime of hell!

More books like Church Boyz: Rod of the Wicked may be found by selecting the categories below:

Tell us what do you think about Church Boyz: Rod of the Wicked.