The Butler: A Witness to History
by Wil Haygood

Read a review of Lee Daniel’s film made from this book.

“The book is brief, but the two sections and many images of Allen’s quietly extraordinary life speak volumes about a nation struggling, and succeeding by degrees, to come to terms with an ignominious history of racial inequality. Poignant and powerful.” —Kirkus Reviews 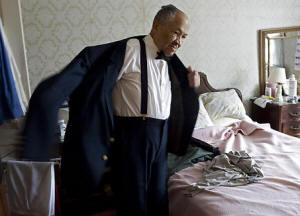 With a foreword by the Academy Award nominated director Lee Daniels, The Butler not only explores Allen’s life and service to eight American Presidents, from Truman to Reagan, but also includes an essay, in the vein of James Baldwin’s jewel The Devil Finds Work, that explores the history of black images on celluloid and in Hollywood, and fifty-seven pictures of Eugene Allen, his family, the presidents he served, and the remarkable cast of the movie.

Books similiar to The Butler: A Witness to History may be found in the categories below: