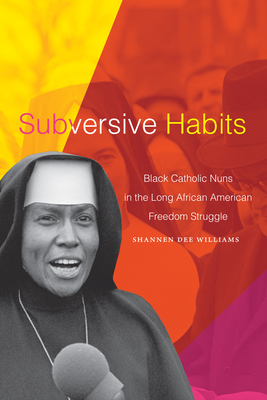 In Subversive Habits, Shannen Dee Williams provides the first full history of Black Catholic nuns in the United States, hailing them as the forgotten prophets of Catholicism and democracy.

Drawing on oral histories and previously sealed Church records, Williams demonstrates how master narratives of women’s religious life and Catholic commitments to racial and gender justice fundamentally change when the lives and experiences of African American nuns are taken seriously. For Black Catholic women and girls, embracing the celibate religious state constituted a radical act of resistance to white supremacy and the sexual terrorism built into chattel slavery and segregation.

Williams shows how Black sisters—such as Sister Mary Antona Ebo, who was the only Black member of the inaugural delegation of Catholic sisters to travel to Selma, Alabama, and join the Black voting rights marches of 1965—were pioneering religious leaders, educators, healthcare professionals, desegregation foot soldiers, Black Power activists, and womanist theologians. In the process, Williams calls attention to Catholic women’s religious life as a stronghold of white supremacy and racial segregation—and thus an important battleground in the long African American freedom struggle.

2022 marks the 30th anniversary of Sister Act. For most people, Whoopi Goldberg’s Golden Globe-winning performance as Sister Mary Clarence is the dominant interpretation of an African American nun and the desegregation of white Catholic sisterhood in the United States. Subversive Habits: Black Catholic Nuns in the Long African American Freedom Struggle, which received a starred review from Publishers Weekly, tells the story of America’s real sister act: the story of how generations of African American women and girls called to the sacred vows of poverty, chastity, and obedience fought against racism, sexism, and exclusion to become and minster as consecrated women of God in the Roman Catholic Church. In offering the first full history of Black sisters in the United States, this book turns overdue attention to Catholic women's religious life as a stronghold of white supremacy and racial segregation—and thus an important battleground in the long African American freedom struggle.

I wrote Subversive Habits because the great Nobel laureate and Catholic writer Toni Morrison once said: “If there is a book you want to read, but it hasn’t been written yet, then you must write it.” I am a lifelong Catholic and the daughter of the first Black woman to graduate from the University of Notre Dame. Yet, my mother and I did not learn of the existence of Black nuns in our church until 2007 when I stumbled upon a newspaper article from 1968 announcing the formation of a Black power federation of Catholic nuns called the National Black Sisters’ Conference. When confronted with a silenced past, the greatest responsibility of the historian--and the most radical thing any person can do--is to tell the story that was never meant to be told. For far too long, scholars of the American, Catholic, and Black pasts by virtue of misrepresentation, marginalization, and outright erasure have unconsciously and consciously declared that the history of Black Catholic nuns does not matter. Subversive Habits unequivocally demonstrates that their history does matter--and has always mattered.” —Dr. Shannen Dee Williams

Books similiar to Subversive Habits: Black Catholic Nuns in the Long African American Freedom Struggle may be found in the categories below: