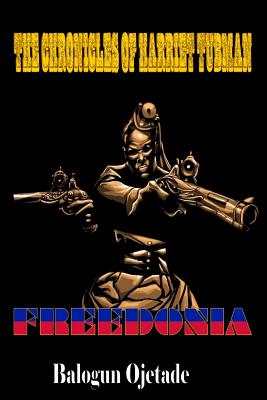 The Chronicles of Harriet Tubman: Freedonia
by Balogun Ojetade

Book Description:
Set in Freedonia author Milton Davis’ world, brought to life in the "Steamfunk!" anthology and fully realized in the Steamfunk novel, "From Here to Timbuktu" Harriet Tubman and her friend and rival, “Stagecoach” Mary Fields, chase agents of the vengeful Alchemist out of their world and into another, in which Frederick Douglass and a quite different Harriet Tubman govern a country of former enslaved Africans that rivals and often bests the United States, England and France in power and technology. Harriet must fight to stop a powerful alliance of British and American soldiers and the elite and fearsome Hwarang warriors of Joseon (“Korea”) from invading Freedonia. But a wicked force from Harriet’s world has come to destroy Freedonia and all it stands for. Will Harriet and her allies be able to stand against it?

More books like The Chronicles of Harriet Tubman: Freedonia may be found by selecting the categories below:

Tell us what do you think about The Chronicles of Harriet Tubman: Freedonia.