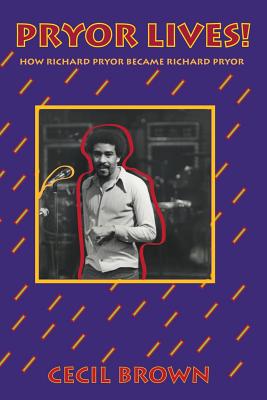 Paperback Description:
Pryor Lives! How Richard Pryor Became Richard Pryor By Cecil Brown How did a scraggly standup comic became one of America’s most controversial social satirists? How did Richard Pryor take the traditional stand-up form and used it to become a cultural hero? Cecil Brown, who, after witnessing Mr. Pryor’s performance at Mandrake’s in 1969 in Berkeley, California, became his running buddy for the next 30 years. He traveled with Mr. Pryor, wrote screenplays for him, and collaborated with him on other projects. Using many years of intimate experiences behind the scenes, Mr. Brown traces the evolution of Mr. Pryor’s "white bread" comedy," (in which he imitated Bill Cosby) to the hilariously raunchy material that catapulted him to international fame. Following Mr. Pryor’s career from the small standup performances in Berkeley to his performances at the Comedy Store on Sunset Boulevard in Hollywood, the author shows how Mr. Pryor used his stage performances to transform the harsh unforgiving realities of his life (tax evasion, domestic violence, freebase meltdown, heart attacks) into classic American comic art. Tracking Mr. Pryor’s rise to star power, this book shows how Mr. Pryor made Stand-Up, into an instrument of spontaneity and a serious platform for public joking. If Pryor had stayed with this program, he would have been just another brilliant comedian. But, as Brown reveals, Mr. Pryor went further. His art depended on his locating, exposing, and tracking the demons that plagued his audience. His performance on stage resembled a shaman performing a ritual of exorcism. As a healer, he used comedy to nurse the damaged souls of the counter-culture, the black power community, the hippies, the new-age, the born-again Christians back to health. There is no better example of this phenomena than the Hollywood Bowl incident that took place in 1977 in Los Angeles, in which Mr. Pryor addressed a 17, 000 crowd that was celebrating support for Gay Pride. He chastised the white and largely gay audience for not giving attention to the suffering of inner city Blacks. The audience booed and hissed him. As one member of the audience later recalled, "Pryor presented his backside to us and informed us we could kiss his ’rich, black ass!’". The honesty that Mr. Pryor offered that evening still reverberates in our society today and has caused the gay community to become for aware of the misfortunate of others. Written in a humorous, scholarly, witty style, this biography earns the accolades that Pryor himself wrote about his friend. "I have never met a writer who loved his work as much as Cecil Brown," Pryor wrote in praise of Brown’s novel, Days Without Weather (1983), "The humor, the warmth, and even the smell are beautiful. The gentleness with which he handles his memories of his character is great." "A great writer, and a great friend," he said, on the Bicentennial Nigger album.
Book Reviews: Forget about those other books written ostensibly about Richard Pryor! Finally, there is a sensitive, revealing and truthful book concerning Richard Pryor and how he became the funniest man in America on stage and on film. Part memoir, and part eyewitness to Show Business history, Cecil Brown’s book, PRYOR LIVES! is the most definitive book to date about the late comedian’s rise to unparalleled stardom. From living and working in Berkeley, California - to being swallowed up by the infested shark-filled waters of Hollywood, the reader will see Richard Pryor with a new, eye-opening perspective - as Cecil Brown writes with empathy and passion about Pryor’s comedy, his life-style, and the tragic events that encompassed his life. Read this book! It’s ground breaking in its scope and style! And it is funny as hell! Robert N. Zagone Film Director

Books similiar to Pryor Lives!: How Richard Pryor Became Richard Pryor Or Kiss My Rich, Happy Black…Ass! A Memoir may be found in the categories below: