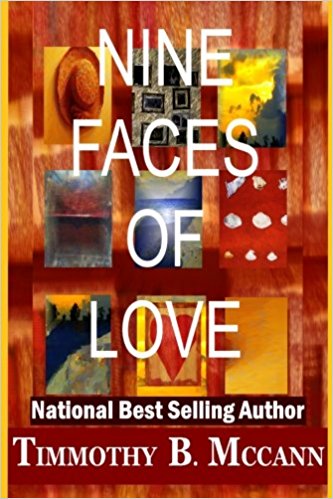 Nine Faces of Love
by Timmothy B. McCann

Book Description:
Nine Faces of Love is a collection of love story from a National Best Selling Novelist described by Publishers Weekly as follows. "McCann’s Strength lies in his ability to weave an engaging tale from the lives of ordinary folk.” The plot lines are intriguing, the characters memorable and the stories stay with you long after the stories end. Nine Faces of Love displays the bare-bones prose style for which Novelist, Timmothy B. McCann is famous. In a collection of works that span over twenty years, we see the evolving of an artist, a kaleidoscope of emotions and, as the title portrays, nine different faces of the much sought after emotion we call love. The book starts with a non-fiction homage to a woman he met on his first national book tour entitled No Ordinary Pain. It was a piece originally penned for Chicken Soup for the African American Soul, but was never published due to the author’s decision that the story was just too personal to release at that time. It’s a story of a love that is fraught with the perils of normal relational ups and down but culminates in an ending that will leave you breathless. It’s a great piece to start such a roller coaster of emotions. There are three delightful stories that deal with love from a different perspective. It’s a love that is almost shared in the story The Imperfect Date. A story about a man who is recently widowed, and is trying to reconnect with who he is after he discovers the only woman he ever loved—never loved him. There’s a story entitled Thanks for What Could Have Been, about a woman who has spent her life waiting for the next bus. A woman wondering what her life could have been. And there’s a story entitled Him and Her. A whimsical look at love through the eyes of a college student who is “smitten” by a woman who marries the school jock and he later becomes one of the most famous men in the world. There is also a piece he wrote 48 hours before the publishing deadline entitled "Why We Make Love." Its the story of two journalist who have been married for only a month and are forced to separate due to an overseas assignment. The authors goal was to wrote an erotic love story without sex. You will find this the hottest non sexual love story you may have ever read. And there is a story entitled "One Thousand Words," with an ending that may leave you speechless. Lastly there’s the deeply personal story entitled Daddy Mom and another one entitled One Witness. In Daddy Mom we read a non-fictional account of the travails of single fatherhood. It’s the anatomy of a fathers love. And in One Witness, we read an extended excerpt of the author’s next novel. In this aspect of love we see what happens when love goes dark. Very dark and very violent. Each story is written with heart, yet none of the stories are mired by the clich d or melodramatic tricks and tools of the trade. The author pushes the envelope with carefully crafted characters that will become a part of you and prose that will make you want to speak the words aloud. These stories bear careful re-reading, like any work of art. McCann is an author that can have you laughing aloud on one page and crying on the next. Like an author given a paint pallet containing all of the colors of the rainbow, he endeavors to push every emotion within you, as he shows you Nine Faces of Love.

More books like Nine Faces of Love may be found by selecting the categories below: