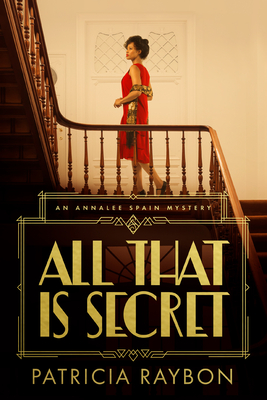 All That Is Secret: An Annalee Spain Mystery (Book 1)
by Patricia Raybon

Can an amateur detective solve the cold case mystery of her lost father’s murder?

In the winter of 1923, Professor Annalee Spain—a daring but overworked theologian at a small Chicago Bible college—receives a cryptic telegram calling her home to Denver to solve the mystery of the murder of her beloved but estranged father.

For a young Black woman, searching for answers in a city ruled by the KKK could mean real danger. Still, with her literary hero Sherlock Holmes as inspiration, Annalee launches her hunt for clues, attracting two surprising allies: Eddie, a relentless young white boy searching for his missing father, and Jack, a handsome Black pastor who loves nightclub dancing and rides in his sporty car, awakening Annalee’s heart to the surprising highs and lows of romantic love.

With their help, Annalee follows clues that land her among Denver’s powerful elite. But when their sleuthing unravels sinister motives and deep secrets, Annalee confronts the dangerous truths and beliefs that could make her a victim too.

Books similiar to All That Is Secret: An Annalee Spain Mystery (Book 1) may be found in the categories below: