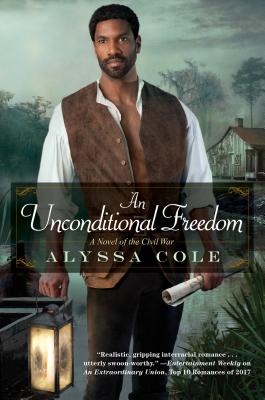 An Unconditional Freedom (The Loyal League)
by Alyssa Cole

Paperback Description:
An assassination plot that could end the Civil War, and a hidden enemy that could destroy a secret league of unsung heroes …

Daniel Cumberland, born free in Massachusetts, studied law with dreams of helping his people—dreams that died the night he was kidnapped and sold into slavery. Daniel is rescued, but he’s a changed man. When he’s offered entry into the Loyal League, the covert organization of Black spies who helped free him, he seizes the opportunity for vengeance against the Confederacy and those who support it.

When the Union Army occupies the Florida home of Cuban Janeta Sanchez, daughter of an enslaved woman and the plantation owner who married her, her family’s wealth does not protect her father from being imprisoned. Under duress and blaming herself for the arrest, Janeta agrees to infiltrate a group called the Loyal League as a double agent—and finds a cause truly worth the sacrifice.

Daniel is aggravated by the headstrong and much too observant new detective he’s paired with, and Janeta is intrigued by the broken but honorable man she is tasked with betraying. As they embark on a mission to intercept Jefferson Davis and thwart European meddling, their dual hidden agendas are threatened by the ghosts of their pasts and a growing affection that could strengthen both the Union and their souls—or lead to their downfall.
Praise for Alyssa Cole

“This book is fantastic.”
—Kirkus STARRED REVIEW on A Hope Divided

More books like An Unconditional Freedom (The Loyal League) may be found by selecting the categories below: