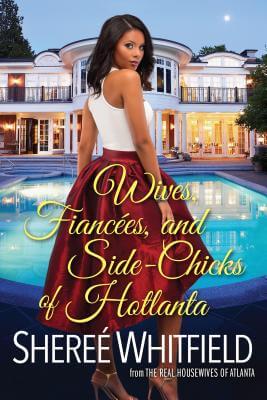 Wives, Fiancées, and Side-Chicks of Hotlanta
by Sheree Whitfield

Book Description:
From Shereé Whitfield, one of the stars of Bravo TV’s hit show The Real Housewives of Atlanta, comes a debut novel that’s a page-turning mix of rumor, fiction, and a tantalizing dash of reality

Sasha Wellington has put herself on the fast track to success. Fresh out of college, she’s got her career as a fashion designer and entrepreneur all planned out. Her only wild card is choosing which city to launch from. When fate points her to Atlanta, she sets out to make her dreams come true

Before she knows it, Sasha’s befriended by two rival BFFs. First there’s Norman, savvy stylist to Atlanta’s stars, from the A-list on down. Then there’s Nina, an outrageous personality with a questionable nightlife. Between their antics, Sasha’s beyond grateful for her coworker, Casey. Married to an NBA player, Casey’s got class. But there’s more than meets the eye to being a baller’s wife. And the more time Sasha spends among the movers and shakers, the clearer it gets that just like on reality TV, the truth lies behind-the-scenes. Still, she’s not worried about getting caught up in the drama—until she’s romanced by a baller of her own. Can she stick to her game plan, or will Hotlanta derail her future—and reveal a side of herself even she didn’t know existed?

More books like Wives, Fiancées, and Side-Chicks of Hotlanta may be found by selecting the categories below: