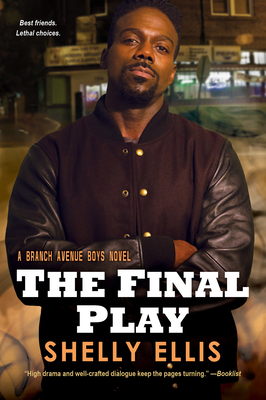 The Final Play
by Shelly Ellis

Book Description:Three best friends from the streets found success—in very different ways. But with a crisis detonating around them, their bond could also destroy everything they care about . . . No matter how tough the odds, Ricky, Derrick, and Jamal learned to unite and fight during their time at the Branch Avenue Boys’ Youth Institute. But their adult lives have driven them apart—and set off a series of events their friendship may not survive. All Jamal’s political achievements can’t erase his bargain with D.C.’s corrupt mayor. And when he finds himself the latest target on Mayor Johnson’s hit list, he’ll risk everything to end the mayor’s deadly reign—even if it’s the last move he ever makes. Institute head Derrick refuses to cave to D.C. drug king pin Dolla Dolla and sell out all he believes in. But his courageous stand might cost him the Institute—and the woman he loves . . . With a pregnant girlfriend, Ricky can’t stay on the run forever. Now he’s making a dangerous play to win. But with Derrick and Jamal in Dolla’s sights, Ricky and his friends must resolve the conflicts keeping them apart if they want to come back together—even if that means none of the Branch Avenue Boys will be left standing . . .
"Ellis makes a promising start in her new Branch Avenue Boys series, which expertly melds elements of gritty urban fiction with contemporary multicultural romance and tells a captivating tale from three different perspectives . . . sure to please fans of De’Nesha Diamond and Victoria Christopher Murray."
—Booklist on In These Streets

More books like The Final Play may be found by selecting the categories below: