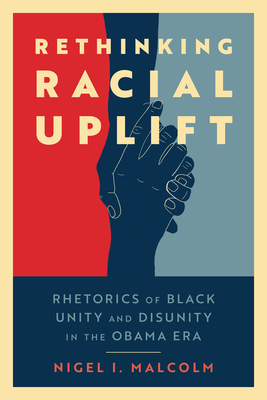 Rethinking Racial Uplift: Rhetorics of Black Unity and Disunity in the Obama Era (Hardback)
by Nigel I. Malcolm

In 1903, W. E. B. Du Bois wrote about the Talented Tenth in an influential essay of the same name. The concept exalted college-educated Blacks who Du Bois believed could provide the race with the guidance it needed to surmount slavery, segregation, and oppression in America. Although Du Bois eventually reassessed this idea, the rhetoric of the Talented Tenth resonated, still holding sway over a hundred years later.

In Rethinking Racial Uplift: Rhetorics of Black Unity and Disunity in the Obama Era, author Nigel I. Malcolm asserts that in the post-civil rights era, racial uplift has been redefined not as Black public intellectuals lifting the masses but as individuals securing advantage for themselves and their children. Malcolm examines six best-selling books published during Obama’s presidency―including Randall Kennedy’s Sellout, Bill Cosby’s and Alvin Poussaint’s Come on People, and Ta-Nehisi Coates’s Between the World and Me―and critically analyzes their rhetorics on Black unity, disunity, and the so-called “postracial” era. Based on these writings and the work of political and social scientists, Malcolm shows that a large, often-ignored, percentage of Blacks no longer see their fate as connected with that of other African Americans.

While many Black intellectuals and activists seek to provide a justification for Black solidarity, not all agree. In Rethinking Racial Uplift, Malcolm takes contemporary Black public intellectual discourse seriously and shows that disunity among Blacks, a previously ignored topic, is worth exploring.