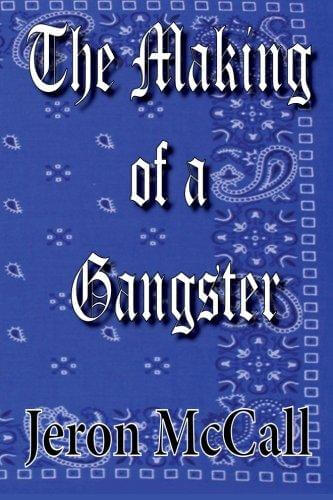 The Making Of A Gangster
by Jeron McCall

Book Description:
Gangbanging had been a destructive force in Los Angeles County for nearly thirty years, and resulted in the murders of thousands of Black and Hispanic males. As the millennium approached, gang wars between Bloods, Crips, and different Crip factions continued to harm the Black community. Violent crime resulted in the forced removal of Black males from the Black community through murder and incarceration. And despite the negativity caused by gangbanging, Black youth continued to enter that lifestyle.

Antoine Edwards was raised in the City of Hawthorne, which was one of 88 cities in Los Angeles County. He never knew his father, and his mother was addicted to crack cocaine. His grandmother raised him, and although she wanted the best for him, her plan was unable to compete with the negativity that surrounded them.

Before Antoine became a teenager, he joined the local street gang. The influence of the older members of the gang turned him into an adolescent robber and killer. He embodied the gangster lifestyle and sought to be a successful gangbanger instead of a productive, law-abiding member of society. Antoine cared little about the harm his actions caused his people and community. But he was eventually forced to suffer the consequences of his actions, and when that occurred, it was too late for his life to be redeemed.

More books like The Making Of A Gangster may be found by selecting the categories below:

Tell us what do you think about The Making Of A Gangster.