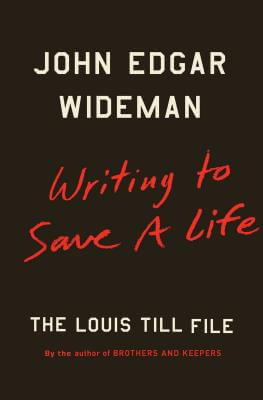 Writing to Save a Life: The Louis Till File
by John Edgar Wideman

Hardcover Description: An award-winning writer traces the life of the father of iconic Civil Rights martyr Emmett Till a man who was executed by the Army ten years before Emmett’s murder. An evocative and personal exploration of individual and collective memory in America by one of the most formidable Black intellectuals of our time.

In 1955, Emmett Till, aged fourteen, traveled from his home in Chicago to visit family in Mississippi. Several weeks later he returned, dead; allegedly he whistled at a white woman. His mother, Mamie, wanted the world to see what had been done to her son. She chose to leave his casket open. Images of her brutalized boy were published widely. While Emmett’s story is known, there’s a dark side note that’s rarely mentioned. Ten years earlier, Emmett’s father was executed by the Army for rape and murder.

In Writing to Save a Life, John Edgar Wideman searches for Louis Till, a silent victim of American injustice. Wideman’s personal interaction with the story began when he learned of Emmett’s murder in 1955; Wideman was also fourteen years old. After reading decades later about Louis’s execution, he couldn’t escape the twin tragedies of father and son, and tells their stories together for the first time. Author of the award-winning Brothers and Keepers, Wideman brings extraordinary insight and a haunting intimacy to this devastating story.

An amalgam of research, memoir, and imagination, Writing to Save a Life is completely original in its delivery an engaging and enlightening conversation between generations, the living and the dead, fathers and sons. Wideman turns seventy-five this year, and he brings the force of his substantial intellect and experience to this beautiful, stirring book, his first nonfiction in fifteen years.

More books like Writing to Save a Life: The Louis Till File may be found by selecting the categories below: