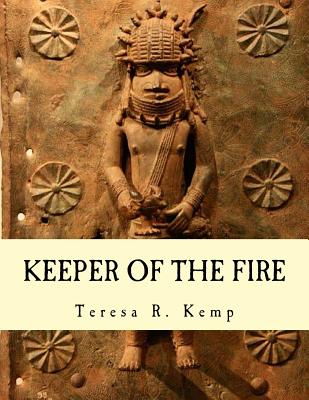 Keeper of the Fire
by Teresa Kemp

Paperback Description:
If you were left with questions after reading “Hidden in Plain View” by Tobin & Dobard, this book has the answers. The 1st book done by Dr. Ozella William’s family. It’s a presentation of 5 generation’s collective research. In the "Keeper of the Fire", they share age-old fabrics of internationally gathered photos of the quilt patterns on homes, art & people. Her European family is documented from 149 AD. This starts the documentation of Farrow-McDaniel’s African history sources. They tell their own story. Few Americans read multi-lingual sources preserved centuries by international slavers. They piece a sampler quilt for you. Using common sense as binding, primary sources the stitching, gathering African metallurgy & symbols Mrs. Kemp exposes distortions/omissions. THE RESEARCH CONTINUES: Here is what they know. In 1844, Thomas Dover, willed Dover Hall Plantation estate to nephew, William D. Jenkins. Peter & Eliza Farrow, are listed among the subjugated workers. Serena mother’s, (Mary Eva) great-grandparents survived slavery & had a son in 1850’s. Named Peter Farrow Jr. after his father, he continued in service to his extended family & community. He shared Igbo culture with his children (Tom, Frank Nora & Jency), and his great grandchildren. Peter died in 1946 in SC. They have 6 generations living, the oldest turned 104, Aug. of 2014 & 5 family members in the 90’s. MS. WILSON’S AUNT TRAVELED TO GERMANY: Aunt Ozella traveled to tour with her family several times. In Europe Ozella, would point out stolen African or purchased artifacts. Ms. Kemp also visited with Ozella in Los Angeles, CA for 2 weeks in 1975. The Quilt Code was not created in 1990’s, Ozella (Mary Eva’s sister) copyrighted the "Quilt Codes" in 1950, 6 years after her grandfather died. The late Mrs. Wilson & Mrs. T. Kemp re-applied & received the US Copyrights. 2" KNOTS: Mnemonic devices used in quilts. Knots in quilts are similar to Catholic rosary, used as points of Godly contact. For centuries history was memory, songs, paintings, monoliths or in tapestries. Each method of recording are accepted worldwide as communication. In communicating with God for Igbo groups, everything can be used, as a way of making tangible the belief of protection over them. ONE FAMILY’S HISTORY: The Torah, Koran & Bible are stories of Abraham’s family. Israel’s presence in W. Africa, being taken worldwide for slavery, I guess does qualify as just “one families” story, Mrs. Kemp was told by her mother. ”I’m baffled why some American quilting & scholarly communities were confounded by the idea of maps & messages depicted in a quilt. We’re not the only ethnic group who used textile maps. My children asked questions about racism & views of people doubting history of ancient African people. You speak textile language,” noted Mrs. Kemp. Newspapers show people wanted to enslave Irish & German immigrants! “Nothing can change ignorance but education. Education doesn’t change the mistakes made by not knowing history and not learning from previous bad behavior”, said Mrs. Kemp. Igbo followed the Levitical Code. Everything is seen from Chukwu (God’s) view. (Like "WWJD" What Would Jesus Do) “Age is not excuse for idleness. Everyone has a duty to perform, some pray, some have strength, tools or knowledge, others time and money. Even if you don’t need help now, sooner or later you’ll benefit”, says, Kemp. Teresa Kemp, 5th generation master quilter with her late parents, Dr. Howard & Serena Wilson, own one of the largest private collections. She exhibits, consults & collaborates worldwide. Teaching “freedom through obedience to God’s Word”, The mission-teach the “Golden Rule”, delayed gratification & reconciliation skills to at risk-populations, one program at a time. Kemp still sounds the alarm, fighting modern day slavery called “Human Trafficking” with God driven intensity & zeal. Hebrews 10:39 Book your Program “A Presentation that can Heal Communities” www.PlantationQuilts.com

Books similiar to Keeper of the Fire may be found in the categories below: