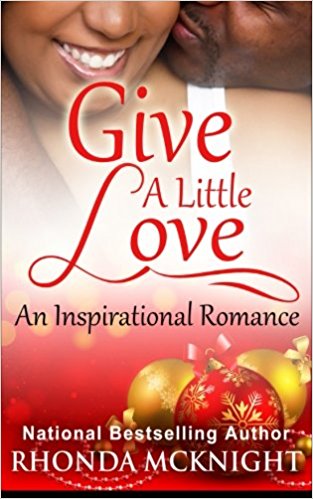 Give A Little Love
by Rhonda McKnight

Paperback Description:
Brooke Jordan thought her Christmas was going to be boring, particularly since she’s stuck working in Montego Bay, Jamaica, instead of home in Charlotte, North Carolina, with her family. Paradise isn’t paradise when you’re not where you want to be, but this Christmas is anything but uneventful. Three airplanes land on the island and Brooke finds herself in exchanges that cause love, temptation, and HATE to surface. Marcus Thompson has pain in his past, but he’s decided it’s time to try love again. A widowed orphan from a wealthy family, he’s alienated from his grandfather and wants a family of his own. His feelings for Brooke can’t be denied, but she won’t give him a chance to prove he’s not the playboy she thinks he is. Though she finds Marcus tempting, Brooke is determined to get off the island without falling for his charms. The two people she trusted the most betrayed her in the worse way, and she isn’t prepared to risk love again. But when her worst enemy stands on her doorstep needing the generosity that has always been a part of Brooke’s character, she begins to question who she is and what she’s allowed heartbreak to do to her. Will she let anger and hate take over and turn her into someone else? Or will she find that even in her pain, she has the capacity to give?

More books like Give A Little Love may be found by selecting the categories below: