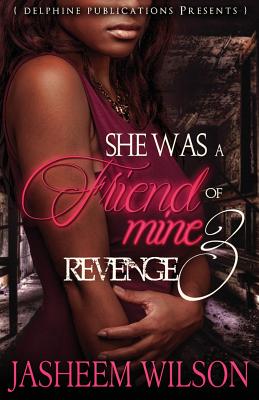 She Was a Friend of Mine 3: Revenge
by Jasheem Wilson

Book Description:
In part three of She Was a Friend of Mine, Shi finds herself married to the game and is caught up in cloud nine as she acts blind to King’s jealousy. She continues to trick herself into believing she is only with Spin for answers as he keeps Shi blind with flashy things and gentle touches. With money as her service dog Shi continues her blind walk into married bliss with Spin. The novelty wears off when the real Spin begins to surface. She sticks by him until her suspicions are confirmed and she finds him in bed with the last person she’d ever suspect. Her fall from grace is a long one as she deals with Spin’s infidelity in her own way and unknowingly sets a chain of event which leads to her brother and the disappearance of her best friend. What happens next will leave you on the edge of your seat. Hell Hath No Fury like Shiesty Shi scorned

More books like She Was a Friend of Mine 3: Revenge may be found by selecting the categories below:

Tell us what do you think about She Was a Friend of Mine 3: Revenge.