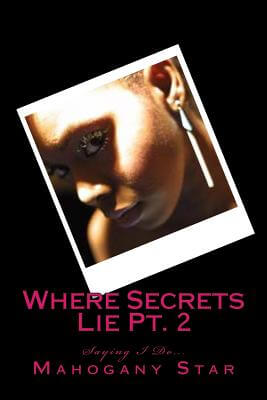 Where Secrets Lie Pt. 2: Saying I Do (Volume 1)
by Mahogany Star

Book Description:
The saying goes, “where there’s smoke, there’s fire.” So where there are secrets, lies, sex, money, jealousy and betrayal, there’s bound to be Drama Shelby’s the last woman who should’ve said, “I do.” But she did, with all intentions of still living the life of a single woman. She’s convinced that her secrets will stay her own, and that love and sex are two things that have nothing to do with each other. Reo loves his wife Shelby, but is growing tired of the marriage he deems stale. The woman he wanted to start a family with has other ambitions, and giving birth is not one of them. Shelby’s constant concern about the superficial is becoming an annoyance that is causing Reo to take a second look at his marriage and his future. Chloe is an up and coming R&B singer who falls in love with a man who belongs to someone else. She risks her heart, her career and her reputation in her quest for love, but will he be able to return her affections? Sasha is about to marry the man of her dreams. Tori, is a strikingly handsome attorney, laced with southern charm and charisma. But when Sasha finds out about what he’s been up to, their chance of wedded bliss is threatened. Dinah, steps on the scene with a pretty face and a smile, but her intentions towards those around her are nothing short of ugly. She has secrets that she intends to keep by all means necessary, and she will wage war against those she thinks threatens to bring her skeletons out of her proverbial closet. In this sequel to “Where Secrets Lie”, lives, relationships and secrets intermingle resulting in an explosive conclusion that will change everyone’s lives forever. Be mindful of the decisions you make, and be wary of Where your Secrets Lie

More books like Where Secrets Lie Pt. 2: Saying I Do (Volume 1) may be found by selecting the categories below:

Tell us what do you think about Where Secrets Lie Pt. 2: Saying I Do (Volume 1).