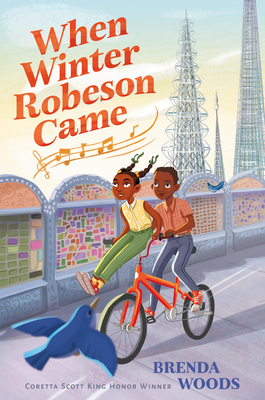 The whole world seems to transform during the summer of 1965, when Eden’s cousin from Mississippi comes to visit her in L.A. just as the Watts Riots erupt, in this stirring new novel by Coretta Scott King Honor winner Brenda Woods.

When Eden’s cousin Winter comes for a visit, it turns out he’s not just there to sightsee. He wants to figure out what happened to his dad, who disappeared ten years earlier from the Watts area of L.A. So the cousins set out to investigate together, and what they discover brings them joy—and heartache. It also opens up a whole new understanding of their world, just as the area they’ve got their sights on explodes in a clash between the police and the Black residents. For six days Watts is like a war zone, and Eden and Winter become heroes in their own part of the drama. Eden hopes to be a composer someday, and the only way she can describe that summer is a song with an unexpected ending, full of changes in tempo and mood—totally unforgettable.