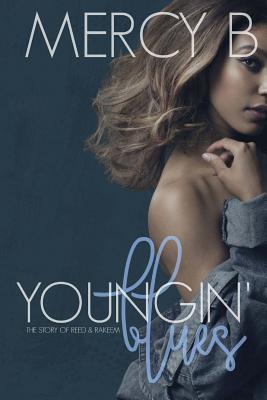 Youngin’ Blues: The Story of Reed and RaKeem
by Mercy B.

Paperback Description:
“When she was a child, my love carried a road-map in her hand the way other girls carried handkerchiefs. She always knew the way. Her feet were little wings. And her beautiful head was a compass.” After falling victim to the vicious Philly streets, Reed and RaKeem are victorious. Time has elapsed and the young couple is making waves in only a way that is represented by strength. RaKeem, the young boss, has implemented his name in the game, without touching even an ounce of crack rock. With his girl, Reed, by his side, the couple is on a hunt for money and power. Although the dominant duo is far beyond their years, they both suffer from the same crippling forces of any other partnership, born so prematurely. Deceit and guile linger in their space, impeding their glorious destiny. The urge of separation, lack of communication, and partial influence amongst others arises as both Reed and RaKeem tries desperately to get back to one another. With masked intentions, fleshly temptations threaten to dismantle the bond that is shared between the two, but neither Reed or RaKeem are willing to hand over the thrown.

More books like Youngin’ Blues: The Story of Reed and RaKeem may be found by selecting the categories below: