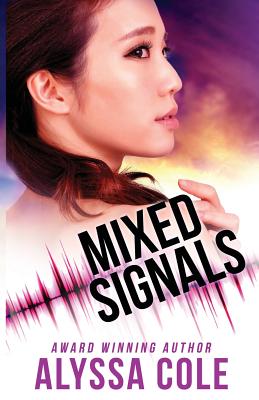 Mixed Signals (Off the Grid, Book 3)
by Alyssa Cole

Book Description:
***Winner of the 2016 RT Reviewer’s Choice Award for Best Futuristic Romance*** Four years after the Flare, the world is finally starting to rebuild. When Maggie Seong gains entry to a college program designed for students in a world coming back from the brink, she’s both excited and scared to leave the family cabin that had become the center of her universe. She discovers she won’t be alone at school, though. Sexy former military cadet Edwin Hernandez—family friend and self-appointed Protector of Maggie’s Virtue—will be there. The thought of sharing a campus with the crush who patted her head and turned her away makes Maggie want to melt into the ground, but then she meets the guy down the hall… Devon, the pre-Flare internet boyfriend she’d assumed was dead, is not only alive but in her dorm. Despite the passage of time, their bond is still strong, but the truth of Devon’s survival threatens their happy reunion. Even as Devon aims for a chance at love IRL—everything Maggie thought she’d wanted—Edwin’s desire to protect her makes her question her heart. Maggie’s torn between the future she didn’t dare to hope for and the past she can’t let go of. When a group of neo-Luddite terrorists threaten the campus, everyone’s loyalties will be tested. To ensure that the world doesn’t go back to the dark days following the Blackout, Maggie might have to sacrifice it all. "This is friends-to-lovers romance but it’s in the science-fiction story line where Cole really shines. The setup of Mixed Signals seems eerily plausible, and the entwined love story will satisfy sci-fi and romance readers alike." —New York Times bestselling author Sarah MacLean, Washington Journal, Best Romances of November 2015 "Another winning installment in an addictive, intelligent and engrossing series." —RT Book Reviews This is a rousing and entertaining end to a trilogy of touching romances. - Publishers Weekly

More books like Mixed Signals (Off the Grid, Book 3) may be found by selecting the categories below: