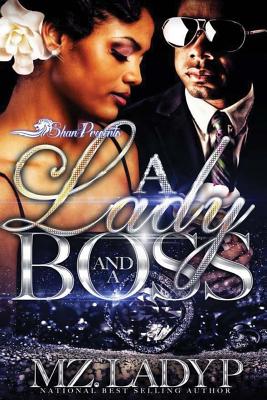 A Lady and a Boss
by Mz. Lady P

Book Description:
You were first introduced to K’Yonnah and Boss in the heart wrenching book Heart of Stone and now they’re back in this highly anticipated follow up to their love story. Imagine meeting the love of your life and not realizing that you were meant to be until it was too late. That’s exactly how it was for K’Yonnah Kyles and Karion "Boss" Miller. K’Yonnah met and fell in love with Boss while she was in a relationship with her boyfriend Stone. Tired of being abused, K’Yonnah finally found the courage to leave Stone. That courage landed him in the cemetery and her in prison for his murder. In an instance, the affair K’Yonnah and Boss had embarked on was over before it ever really had a chance to blossom but of course God always has different plans. While in prison, K’Yonnah learns that she’s pregnant with Boss’ baby. After giving birth she hands the baby over to Boss for him to raise while she’s away. Shortly after, she learns that Boss has gotten married to Meesh. With her blessings, she allows them to raise her son. Fast Foward five years!! K’Yonnah is released and ready to start her new life. Her mind has always told her that she was over whatever it was her and Boss had, but her heart continuously reminds her that’s she’s madly in love with him despite the fact that he’s married. Boss might be married, but his heart is and always will be with his Lady K’Yonnah. Follow the lovers you fell in love with as they find their way back to each other in the unluckiest of circumstances. In this story you will come to realize it’s not about where a man is at its about where he wants to be.

More books like A Lady and a Boss may be found by selecting the categories below: