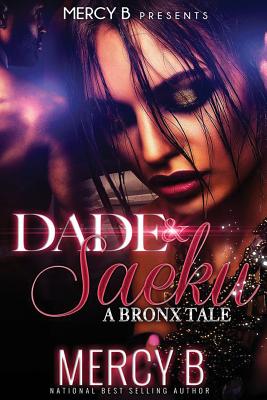 Dade and Saeku: A Bronx Tale
by Mercy B.

Book Description:
SaeKu, the perplexed beauty, first introduced in, "Youngin’ Blues," has found her footing and broadened her horizon. After taking Bella’s advice, the enchanting tender discovered life after failing at Julliard. Now, a flight attendant, traveling the seas, SaeKu is meeting new faces day in and day out. However, no face could ever strike her as the one that she so happened to find sitting in first class during a last-minute assignment that she decided to take on. Dade, the handsome and love stricken 30-year young Virgo, falls deeply in love with the bashful beauty known to you as SaeKu. With years pushing the two apart, SaeKu stumbles upon the only man that she’s loved since her very first boyfriend Bret was brutally murdered, at a very compromising point in his life. In a matter of seconds, SaeKu’s world was flipped upside down. What was supposed to be a heartwarming reunion between Dade and her became one that not either of the two could stomach. Remorseful in every way Dade seeks relief for his long lost lover, but no amount of pleading can repair SaeKu’s broken heart -in result of his unexpected baggage. Still smitten by the presence of the TRUE love of his life, Dade attempts to seal the gap that has been placed between he and SaeKu. Even in his current situation, he’s unable to ignore the wishes of his heart… Explosively, his past and present collide…leaving him to make a decision that could result in utter happiness or unpleasing settlement for the rest of his days.

More books like Dade and Saeku: A Bronx Tale may be found by selecting the categories below:

Tell us what do you think about Dade and Saeku: A Bronx Tale.