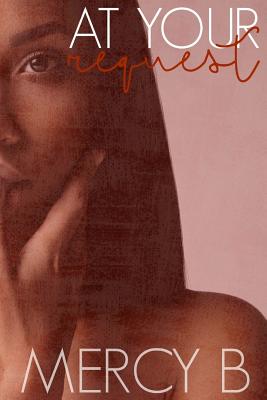 At Your Request (A Southern Love Series)
by Mercy B.

Paperback Description:
One’s strength lies in their uniqueness. While similarities aren’t considered weaknesses, it’s the sole possessions of one human than attracts them to another… that one thing that someone their opposite can find inside of their core, but not within themselves. It’s what attaches them, intrigues them as a flame does a moth. It’s the bridge that gaps them together in a manner that other’s may be ignorant to, while the details are in plain sight for the two basking in the afterglow. Ripleigh, a young single mother, has been beat down by the biggest villain of all. Life has gutted her of her most valuable vessel, the heart. After suffering through the death of her counterpart, and daughter’s father, she’s left with merely a shell to call home for the rest of the organs that are keeping her amongst the living. Ripleigh packed her things and moved down south for a more modest living and to place the pain of loss as many miles behind her as she could. While life seemed to be plentiful closer to the boarder, Ripleigh’s funds were diminishing. Quick on her feet, she reduced her pride and laced up her highest heels to tread the stage of ILLUSION, the most sought out dwelling for upscale nightlife. Semaaj, prominent medical provider and face of Northcross Pediatric Care, stumbles into a dimly lit atmosphere full of hookah smoke, chest rocking base, and clad women with insane skills and enough strength to help him lay the final bricks to his newly purchased children’s clinic. Though he feels as if he’s worlds away from his comfort zone, he feels a familiar tugging of his heartstrings after setting his eyes on the talented Blyss. Semaaj, later, finds himself frequenting the underworld at an alarming rate, and the staff soon knows him by name. His request is simple, Blyss. Two strangers, two completely different worlds, two bizarre parties discover that there is likeness even in their oppositions. While Ripleigh decides to run, Semaaj exchanges his stethoscope and lab coat for joggers and tennis shoes. He accepts the challenge of digging up Ripleigh’s, as known as Blyss, heart -the vessel that had been buried along with her previous lover. Bruised, cut, leaking, and dysfunctional as it may come packaged, he cares nothing for it’s appearance. The purity of it’s inside is what he’s most desirable of.

More books like At Your Request (A Southern Love Series) may be found by selecting the categories below: