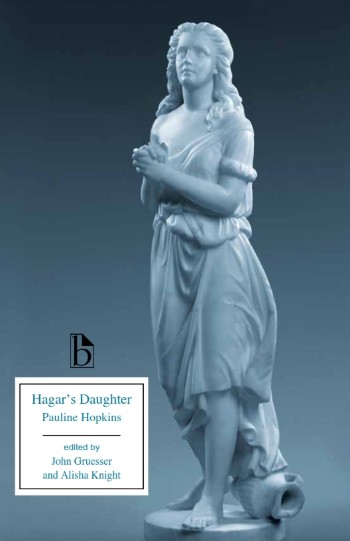 Hagar’s Daughter is Pauline Elizabeth Hopkins’s first serial novel, published in the Boston-based Colored American Magazine (1901-1902). The novel itself features concealed and mistaken identities, dramatic revelations, and extraordinary plot twists. In Part 1, Maryland plantation heirs Hagar Sargeant and Ellis Enson fall in love, marry, and have a daughter. However, Ellis’s covetous younger brother, St. Clair, claims that Hagar is of mixed-race ancestry, putting her and her infant in peril. When Ellis is presumed to be dead, St. Clair sells Hagar and her child into slavery, and they presumably die when Hagar, in despair, leaps into the Potomac River with her daughter. This is the backdrop for Part 2 (set twenty years later), which includes a high-profile murder trial, an abduction plot, and a steady succession of surprises as the young Black maid Venus Johnson assumes male clothing to solve a series of mysteries that are both current and decades-old.

The appendices to this Broadview edition feature advertising for the original publication, other writing by Hopkins and her contemporaries, and reviews that situate the work within the popular literature and political culture of its time.

More books like Hagar’s Daughter: A Tale of Southern Caste Prejudice may be found by selecting the categories below: