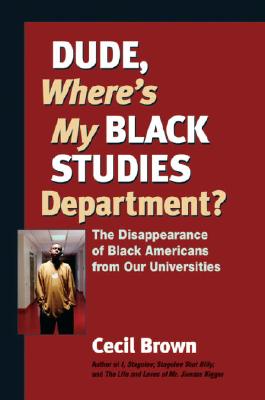 Dude, Where’s My Black Studies Department?: The Disappearance of Black Americans from Our Universities
by Cecil Brown

Paperback Description:WINNER, 2008 PEN Oakland - Josephine Miles National Literary Award Blacks have been vanishing from college campuses in the United States and reappearing in prisons, videos, and movies. Cecil Brown tackles this unwitting disappearing act head on, paying special attention to the situation at UC Berkeley and the University of California system generally. Brown contends that educators have ignored the importance of the oral tradition in African American upbringing, an oversight mirrored by the media. When these students take exams, their abilities are not tested. Further, university officials, administrators, professors, and students are ignoring the phenomenon of the disappearing black student - in both their admissions and hiring policies. With black studies departments shifting the focus from African American and black community interests to black immigrant issues, says Brown, the situation is becoming dire. Dude, Where’s My Black Studies Department? offers both a scorching critique and a plan for rethinking and reform of a crucial but largely unacknowledged problem in contemporary society.

More books like Dude, Where’s My Black Studies Department?: The Disappearance of Black Americans from Our Universities may be found by selecting the categories below: