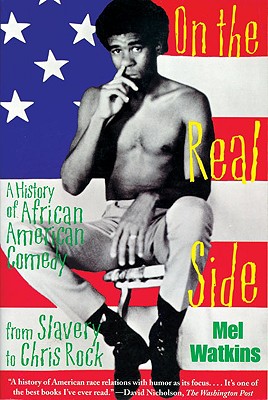 On the Real Side: A History of African American Comedy (Revised)
by Mel Watkins

Book Description:
This comprehensive history of black humor sets it in the context of American popular culture. Blackface minstrelsy, Stepin Fetchit, and the Amos ’n’ Andy show presented a distorted picture of African Americans; this book contrasts this image with the authentic underground humor of African Americans found in folktales, race records, and all-black shows and films. After generations of stereotypes, the underground humor finally emerged before the American public with Richard Pryor in the 1970s. But Pryor was not the first popular comic to present authentically black humor. Watkins offers surprising reassessments of such seminal figures as Fetchit, Bert Williams, Moms Mabley, and Redd Foxx, looking at how they paved the way for contemporary comics such as Whoopi Goldberg, Eddie Murphy, and Bill Cosby.

More books like On the Real Side: A History of African American Comedy (Revised) may be found by selecting the categories below: