The Year Before the Flood: A Story of New Orleans by Ned Sublette 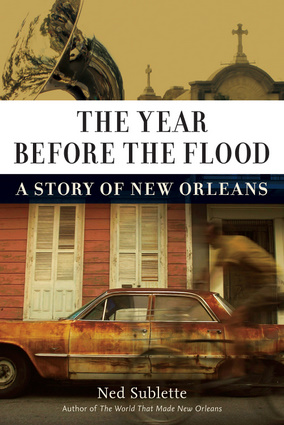 The Year Before the Flood: A Story of New Orleans
by Ned Sublette

Book Description:With a style the Los Angeles Times calls as "vivid and fast-moving as the music he loves," Ned Sublette’s powerful new book drives the reader through the potholed, sinking streets of the United States’s least-typical city. In this eagerly awaited follow-up to The World That Made New Orleans, Sublette’s award-winning history of the Crescent City’s colonial years, he traces an arc of his own experience, from the white supremacy of segregated 1950s Louisiana through the funky year of 2004-2005—the last year New Orleans was whole. By turns irreverent, joyous, darkly comic, passionate, and polemical, The Year Before the Flood juxtaposes the city’s crowded calendar of parties, festivals, and parades with the murderousness of its poverty and its legacy of racism. Along the way, Sublette opens up windows of American history that illuminate the present: the trajectory of Mardi Gras from pre-Civil War days, the falsification of Southern history in movies, the city’s importance to early rock and roll, the complicated story of its housing projects, the uniqueness of its hip-hop scene, and the celebratory magnificence of the participatory parades known as second lines. With a grand, unforgettable cast of musicians and barkeeps, scholars and thugs, vibrating with the sheer excitement of New Orleans, The Year Before the Flood is an affirmation of the power of the city’s culture and a heartbreaking tale of loss that definitively establishes Ned Sublette as a great American writer for the 21st century.