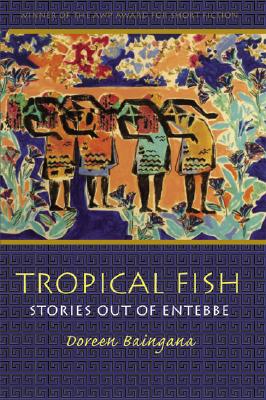 Hardcover Description:
Tropical Fish is a collection of linked short stories that explore the coming of age of three African sisters. Introspective and personal, the stories reveal the unexpected ambiguities of the young women’s lives. The setting is the lush beauty of Uganda and the background is the aftermath of Idi Amin’s dictatorship. But even in such trying circumstances, the stories show that people everywhere face the same basic human struggle to understand themselves, their world, and their place in it.

Each story develops the theme of exploration and discovery as the sisters mature and their interior and exterior lives expand. The youngest sister, Christine, becomes aware at an early age of the bittersweet dynamics of family love and later grapples with romantic and erotic, if problematic, love. Her explorations lead her across racial lines, when she has an affair with a British expatriate in the title story. What is initially an act of curiosity brings forth questions of racial and gender identity. Eager to stitch together a new pattern for her life, Christina ventures to another continent, North America, where she attempts to create a new home and a new self.

In another story, Christina’s sister Patti writes in her diary about the vicissitudes of daily experience at a typical Ugandan girls’ boarding school and the impact of class and religion on her relationships with fellow students. Other stories are written in the voice of the oldest sister, Rosa, who as a precocious teenager tries to decipher the mysteries of sex. Unfortunately, her promising future is harshly disrupted.

In the final story, Christine returns to Uganda and finds her perspective irrevocably altered. She is more acutely aware of her home’s natural beauty, but its physical vibrancy is in stark contrast to the social and political conditions she encounters. Her journey of self-discovery comes full circle, but without any tidy resolutions. Ambiguities and uncertainties remain. What is clear, however, is that this book marks the arrival of a remarkably gifted writer.

More books like Tropical Fish: Stories out of Entebbe (Grace Paley Prize in Short Fiction) may be found by selecting the categories below: