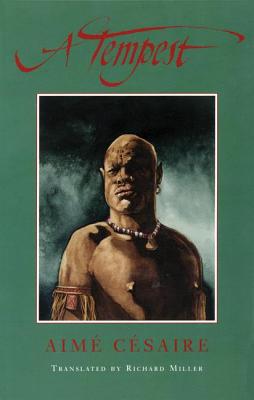 A Tempest: Based on Shakespeare’s ’The Tempest;’ Adaptation for a Black Theatre
by Aimé Césaire

Paperback Description:
?Césaire’s Tempest, in translation by Richard Miller, is a sprightly and song-filled enchantment. The luminous intelligence of Mr. Césaire’s meditation on the absurdities of colonialism shines through the antics of the bewildered characters.” ?New York Times

?The weapon of poetry may be Césaire’s greatest gift to a modern world still searching for freedom. As one of the last truly great ?universalists’ of the twentieth century, he has had a hand in shaping or critiquing many of the major ideologies and movements of the modern world. In his own words: ?Poetic knowledge is born in the great silence of scientific knowledge.’” ?from the Introduction

Césaire’s rich and insightful adaptation of The Tempest draws on contemporary Caribbean society, the African-American experience and African mythology to raise questions about colonialism, racism and their lasting effects.


AIM C SAIRE was a world-renowned poet, essayist and dramatist, whose best known works include Notebook of a Return to My Native Land, The Tragedy of King Christophe and A Season in the Congo. He was the founding editor of Tropiques, which was instrumental in establishing the use of surrealism as a political weapon. He co-formulated the concept of ?negritude,” which urges black Africans to reject assimilation and cultivate consciousness of their racial qualities and heritage. Césaire held a number of government positions in his native Martinique, including that of mayor of Fort-de-France. Césaire died in 2008.

RICHARD MILLER has translated many books, both nonfiction and fiction, including works by Roland Barthes, Brassa? and Albert Camus, as well as poetry, many articles and a number of plays. Among his more recent translations are Scent by Annick Le Guérer and Beethoven’s Ninth by Esteban Buch, which was published in 2002. He lives in Paris.

More books like A Tempest: Based on Shakespeare’s ’The Tempest;’ Adaptation for a Black Theatre may be found by selecting the categories below: