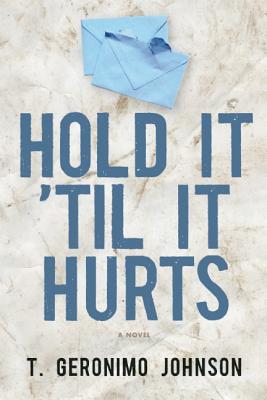 Hold It ’Til It Hurts
by T. Geronimo Johnson

Paperback Description:
Finalist for the 2013 PEN/Faulkner Award
"The magnificence of Hold It ’Til It Hurts is not only in the prose and the story but also in the book’s great big beating heart. These complex and compelling characters and the wizardry of Johnson’s storytelling will dazzle and move you from first page to last. Novels don’t teach us how to live but Hold It ’Til It Hurts will make you hush and wonder."?Anthony Swofford, author of Jarhead"This rich and sophisticated first novel brings together pleasures rarely found in one book: Hold It ’Til It Hurts is a novel about war that goes in search of passionate love, a dreamy thriller, a sprawling mystery, a classical quest for a lost brother in which the shadowy quarry is clearly the seeker’s own self, and a meditation on family and racial identity that makes its forerunners in American fiction look innocent by comparison."?Jaimy Gordon, National Book Award winner for Lord of Misrule
When Achilles Conroy and his brother Troy return from a tour of duty in Afghanistan, their white mother presents them with the key to their past: envelopes containing details about their respective birth parents. After Troy disappears, Achilles?always his brother’s keeper?embarks on a harrowing journey in search of Troy, an experience that will change him forever.

Heartbreaking, intimate, and at times disturbing, Hold It ’Til It Hurts is a modern-day odyssey through war, adventure, disaster, and love, and explores how people who do not define themselves by race make sense of a world that does.

T. Geronimo Johnson was born in New Orleans, Louisiana. His fiction and poetry have appeared in Best New American Voices, Indiana Review, Los Angeles Review of Books, and Illuminations, among others. A graduate of the Iowa Writers’ Workshop and a former Stegner Fellow at Stanford University, Johnson teaches writing at the University of California-Berkeley. Hold It ’Til It Hurts is his first book.

More books like Hold It ’Til It Hurts may be found by selecting the categories below: