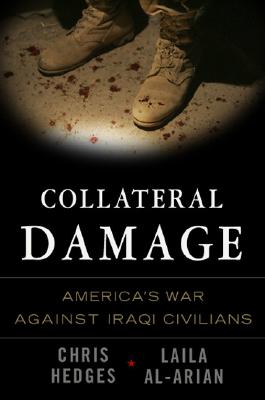 Hardcover Description:
Best-selling author and Pulitzer Prize-winning journalist Chris Hedges and journalist Laila Al-Arian spent the past year interviewing over fifty veterans to expose the patterns of the occupation in Iraq. The testimonies of these soldiers—many of who remain deeply traumatized by their experiences—uncover how the very conduct of the war and occupation have turned the American forces into agents of terror for most Iraqis.Collateral Damage is organized around key military operations—Convoys, Checkpoints, Detentions, Raids, Suppressive Fire, and “Hearts and Minds.” Military convoys traveling at tremendous speeds through towns have become trains of death. Civilians are routinely run over or shot to death. Soldiers fire upon Iraqi vehicles with impunity at checkpoints. Late-night detentions based on shoddy intelligence terrify women, traumatize children, and radicalize the young men caught in their dragnet.These soldiers have found the moral courage to speak out about the true nature of a war that has become one long, unchecked atrocity, and has given rise to the instability, sectarian violence and chaos that we witness today in Iraq.

More books like Collateral Damage: America’s War Against Iraqi Civilians may be found by selecting the categories below: