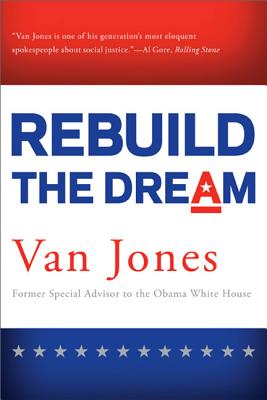 Rebuild The Dream
by Van Jones

Read Our Review of Rebuild The Dream

Hardcover Description:
In Rebuild the Dream, green economy pioneer Van Jones reflects on his journey from grassroots outsider to White House insider. For the first time, he shares intimate details of his time in government and reveals why he chose to resign his post as a special advisor to the Obama White House.Jones puts his hard-won lessons to good use, proposing a powerful game plan to restore hope, fix our democracy and renew the American Dream. The American Dream means different things to people, but the center of gravity is always the same: an ordinary person—who was not born with great wealth, but who is willing to work hard and play by the rules—should be able to find employment, live in a good community, make progress financially, retire with dignity, and give his or her children a better life. That dream is fading. On Main Street, too many people are working harder than ever while falling further behind. They play by the rules, but cannot succeed. At the same time, other Americans, including the worst of Wall Street, break every rule, but cannot fail because someone has already decided that they are “too big” to fail. The American Dream has been turned upside down and inside out. It is time to set things right. As the first Obama administration official to write a book about his experiences, Jones offers a unique perspective. In explaining why the 2008 “hope” bubble burst, he unveils the seven biggest mistakes made by the White House and its supporters. He explores the origin and fate of the movements that helped to elect President Obama, as well as those that have challenged and shaped his presidency. Along the way, Jones systematically reveals surprising parallels between Obama’s people-powered campaign, the Tea Party and Occupy Wall Street. At this pivotal moment, Jones argues that we must make our economy respect the 99% and work for the 100%, not just the 1%. He proposes serious solutions that fit the scale of our problems. Rebuild the Dream sets forth bold ideas inspired by the progressive values that made the twentieth century the “American Century.” It shows how key public policies and investments can create millions of good, American jobs. America is still the best idea in the world. The American middle class is still her greatest invention. Rebuild the Dream is dedicated to the proposition that with the right strategy both can be preserved and strengthened for generations to come.

More books like Rebuild The Dream may be found by selecting the categories below: